At 7pm on Thursday 22 March, Holy Saviour Church was packed full of 150 people, for an event organised by Croydon Citizens (Holy Saviour is a part of this, being one of the churches in Croydon North Deanery, e.g. our ‘Rubbish Project’). The event was a pre-Council Election meeting, where Councillor Tony Newman (current leader of Croydon Council) and Councillor Tim Pollard (running for election) listened to, and commented on, issues brought up by representatives of Croydon College, Coulsdon College and Croydon North Deanery Churches. The issues of concern included street safety, mental health and housing.  Large numbers of young people were there as well as people from West Croydon Baptist Church and members of the other churches in the Deanery, especially St John’s Upper Norwood, Holy Innocents South Norwood, St Stephen’s Norbury and St Luke’s Woodside. We now need to continue meeting to ensure that the Council is held to the promises made, after the local elections on 3 May. 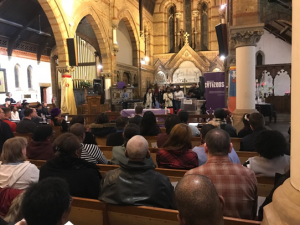 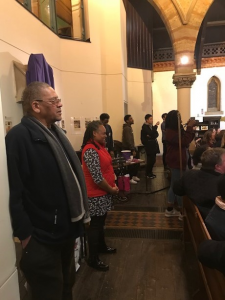 Plants & Seeds for Our Garden

Sometimes kindness and generosity are overwhelming! See below a huge gift of plants and seeds for our garden, left on the Vicarage doorstep by a local resident. You know who you are!  We can’t thank you enough. 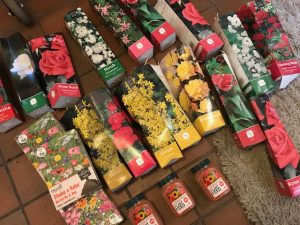 Baby Remy was baptised at Holy Saviour Church on Saturday,17 March. He is seen below with his proud parents, Rachel & Dennis, plus godparents. 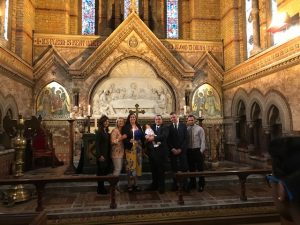 Our Mothering Sunday service on 11 March was once again followed by a traditional Cream Tea, made and served by our Sunday School children and young people. Many thanks to them as well as to Doreen and Alison who guided them. 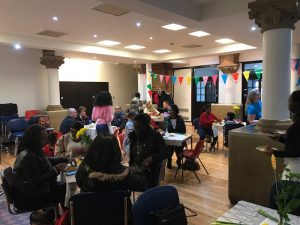 Katie and Steven, who are part of our congregation, were married at Holy Saviour Church on Saturday,10 March. In the picture below, you can see them leaving the church after the service as husband and wife, about to be showered with confetti!  We pray for them on their honeymoon.

A memorial service for Liz Williams, wife of our former Churchwarden Michael Williams, was held at Holy Saviour Church on Wednesday, 28 February. The picture below shows the altar full of flowers and candles brought up by the congregation in her honour. 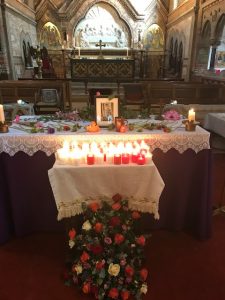